Well, back to the story of this trip, which I’m sure you’ve just been holding your breath for. I’ve successfully looked at the thesaurus for synonyms for the word magic, so I’m ready to keep writing about this experience.

After our crazy night swim at the Mývatn Nature Baths, we headed back to the guesthouse for a good night’s rest. The room was nice. It really was. It was so so hot in there, though. My bed was right next to the heater, and on a few occasions I almost burned my feet trying to thrash the covers off of me. I couldn’t figure out how to turn off the heater, so I opened the tiny window and waited for the room to cool down so I could sleep. I’m a terrible sleeper. It’s just not a skill of mine, but I digress. Once I managed to fall asleep, the bed was comfy, and I felt well enough rested in the morning.

We started the day with a complementary breakfast, including hardboiled sulfur eggs. Yum. Not really. After dropping off our room key, we headed out to see some sights. The area is ripe with volcanic fields. Vast areas of land looked like a war zone where hot air pockets have lifted lava fields into rough textures. 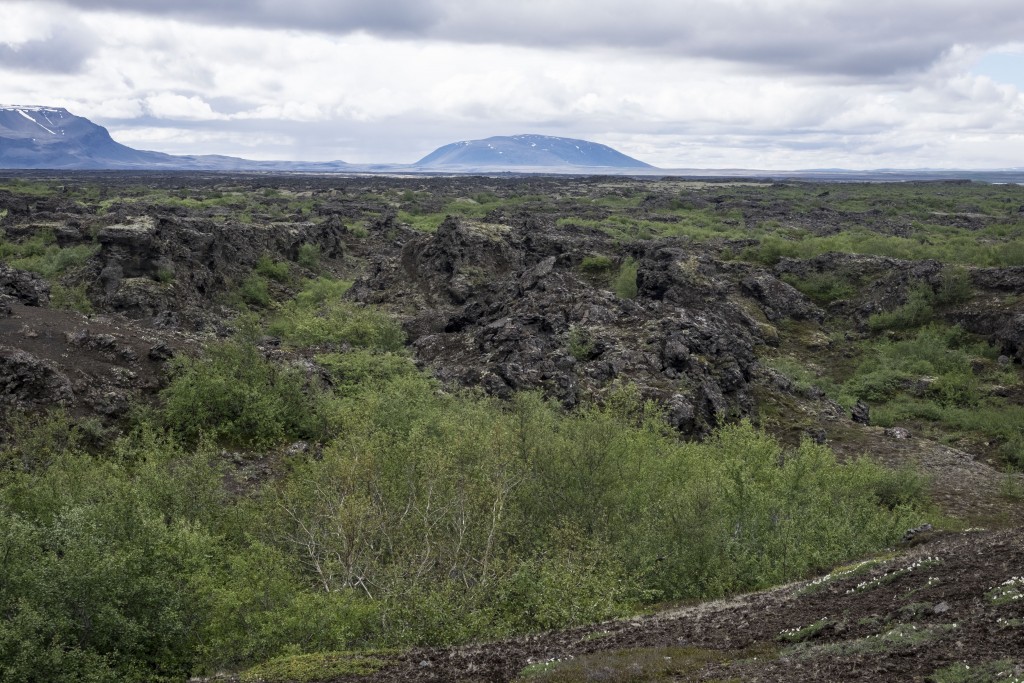 This same phenomenon created the next site we visited. Dimmuborgir is a hiking area where the resulting structures were quite large and sculptural. It’s so iconic that Game of Thrones was actually filmed here. I climbed down into Grjótagjá, the cave that served as Jon and Ygritte’s love nest, and hiked through the place where ‘King Beyond the Wall’ Mance Rayder set up his camp. Granted, they filmed in the winter, so it looked a little less snowy. Nonetheless, it was pretty cool to take “band pics” in the same rock formation seen in GoT and to climb down into the cave where Jon Snow’s naked bottom once sat. I’ll treasure that fact. 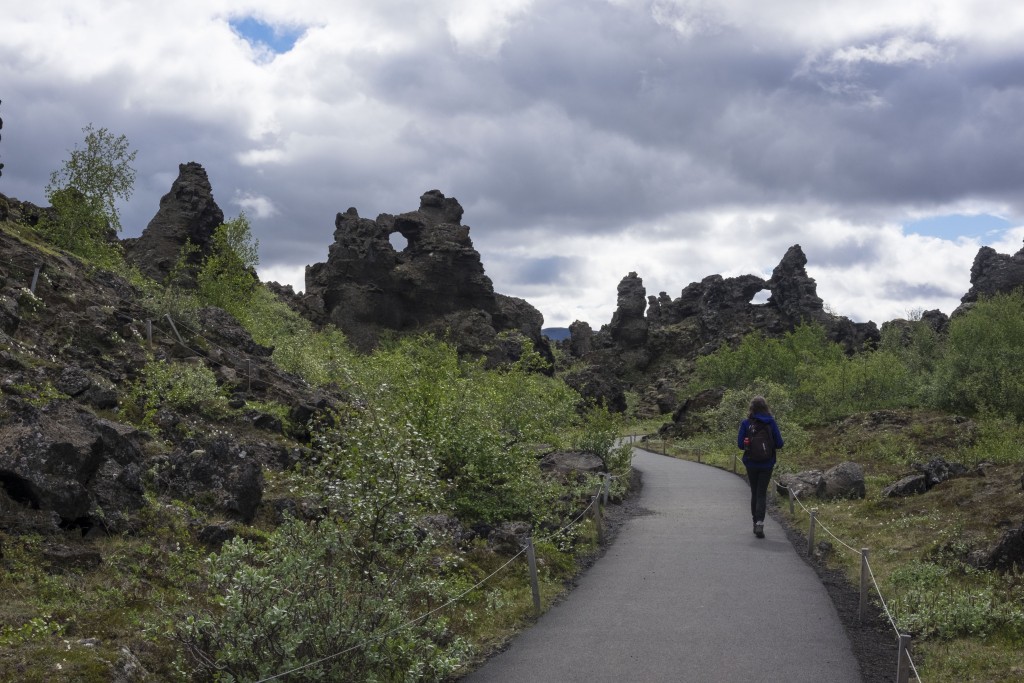 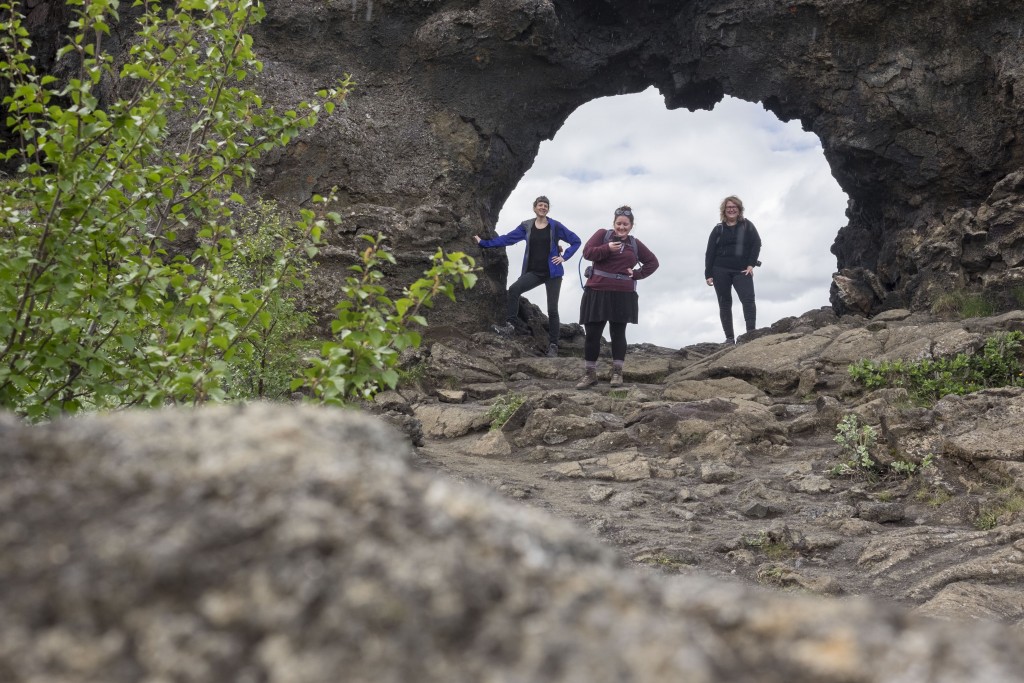 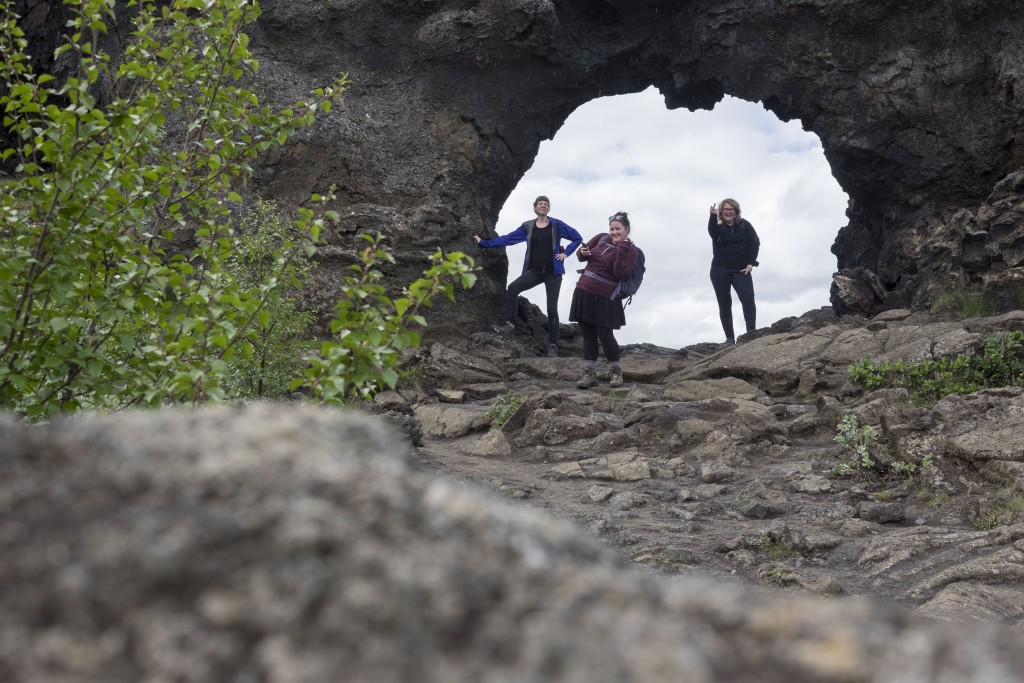 Beyond Game of Thrones, the area carries it’s own rich folklore. It is said that Dimmuborgir once was the home of vicious trolls, whose sons The Yule Lads have become entwined in the Christmas story in Iceland as a kind of frightening alternative Santa Claus. The park really embraced this history and included official signage talking about the Yule Lads and even clad caves with Yule Lad home goods, which of course I inserted myself for a photo op. 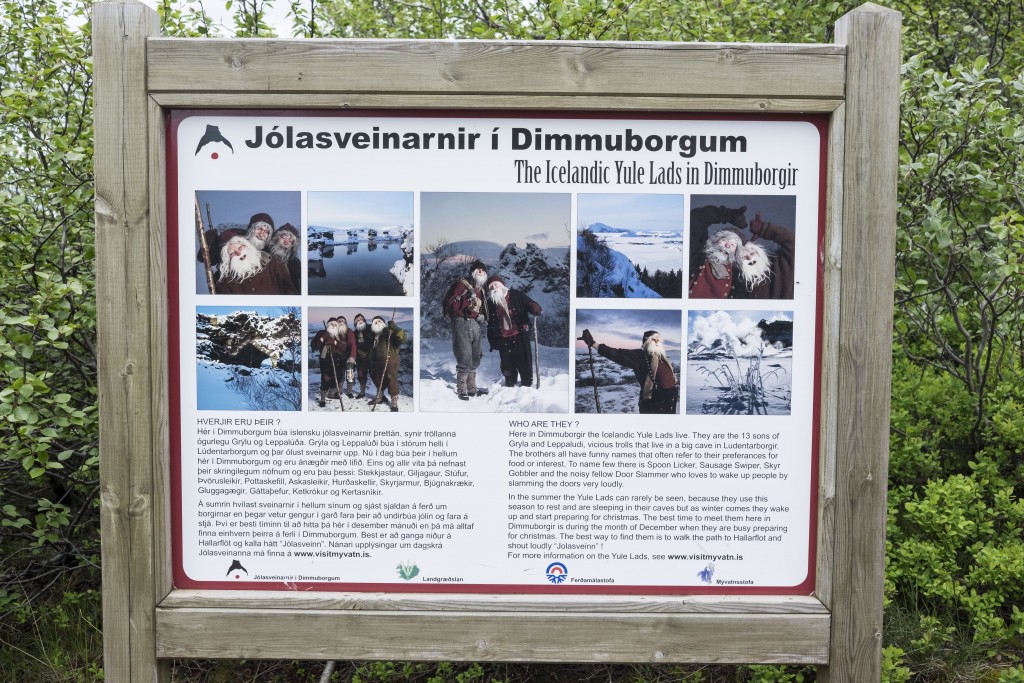 From there, I somehow got separated from Patricia and Jane for a while. During this time, I joined a new family…a woolly one. They were pretty welcoming. I was eventually reunited with my original group, and we hiked there a little while longer, finding another cave, which had been coined the church—for me, it was. 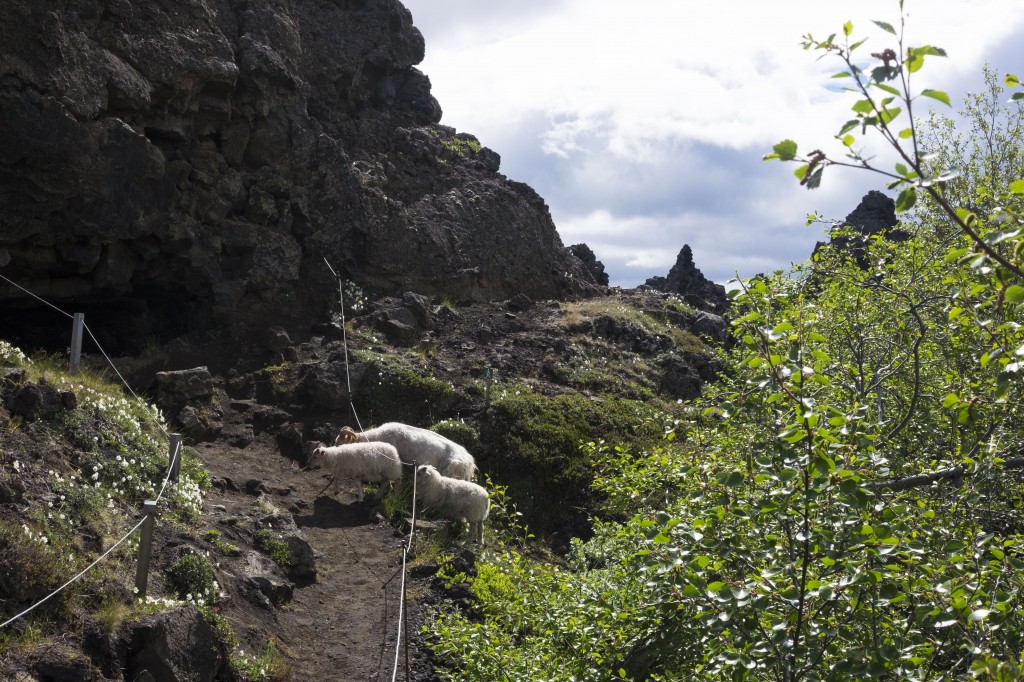 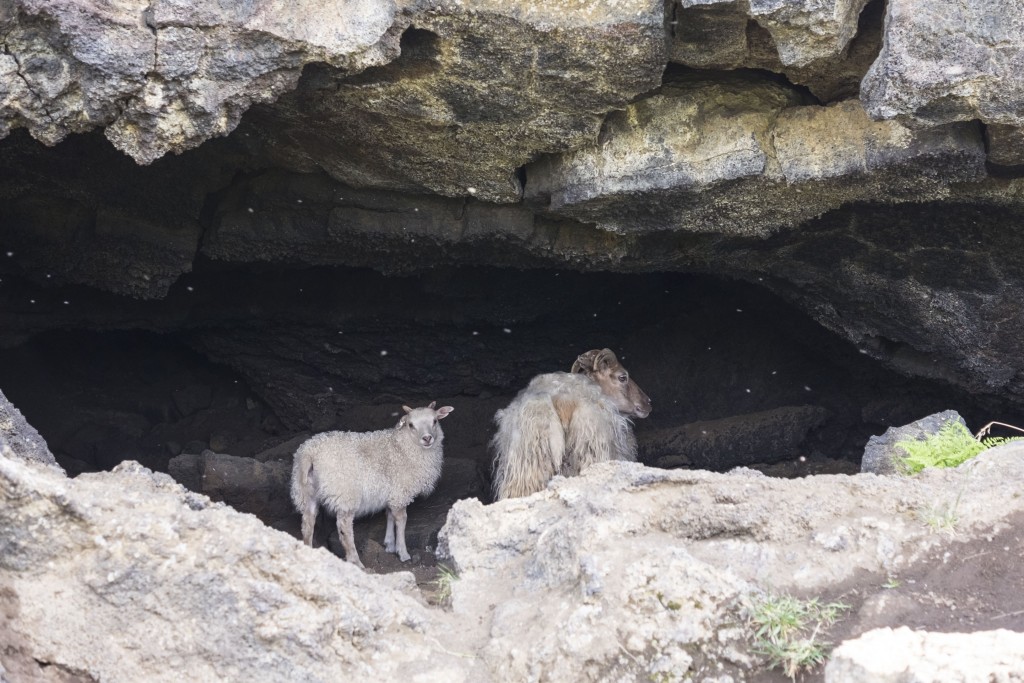 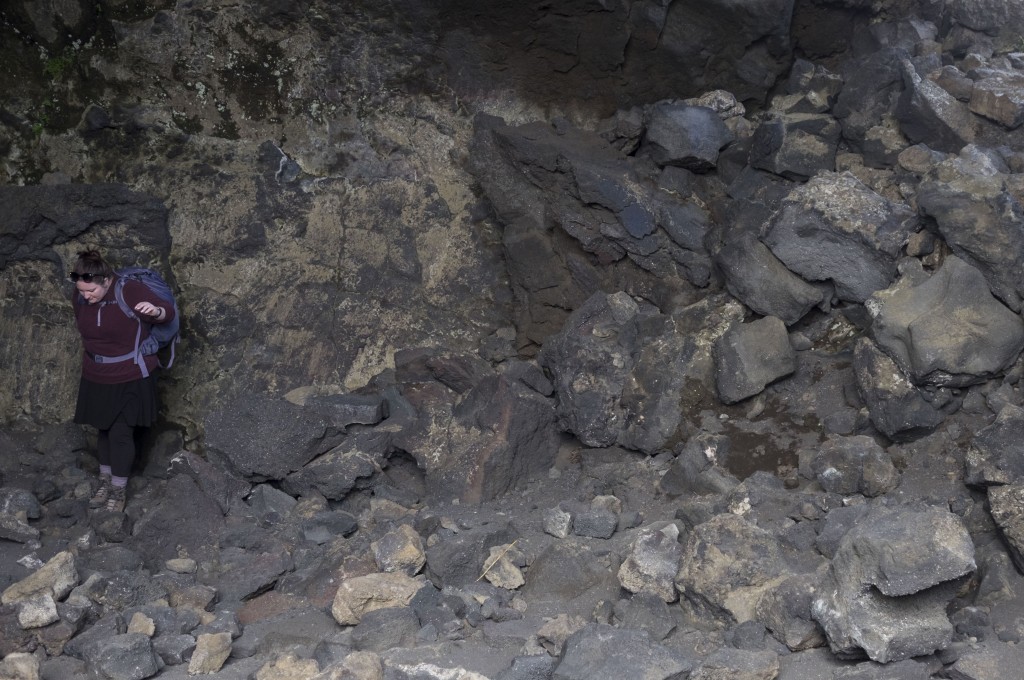 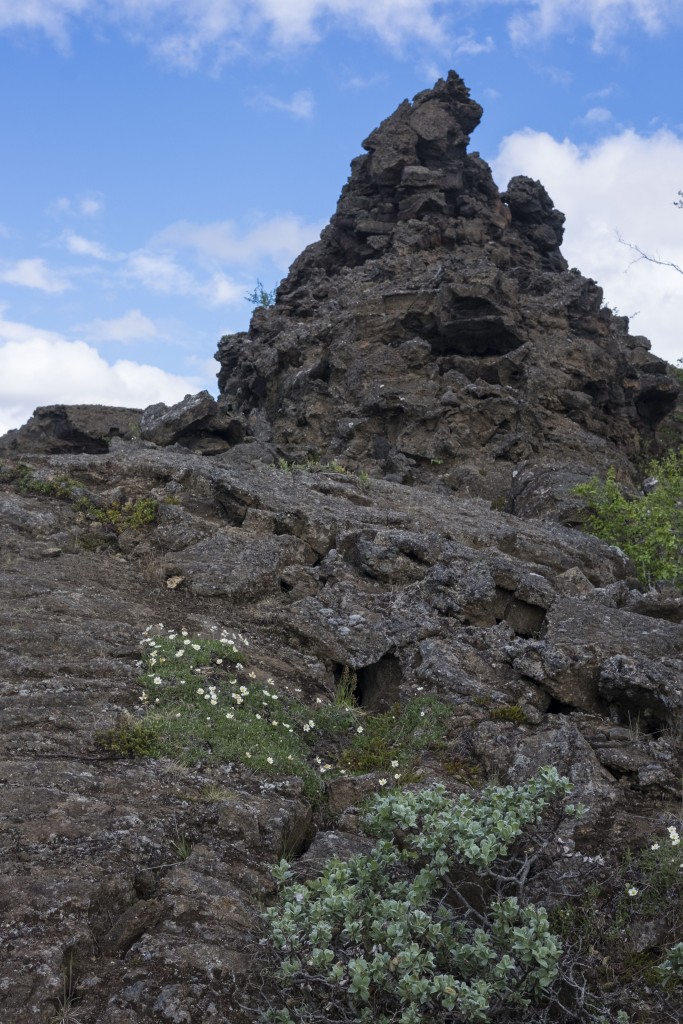 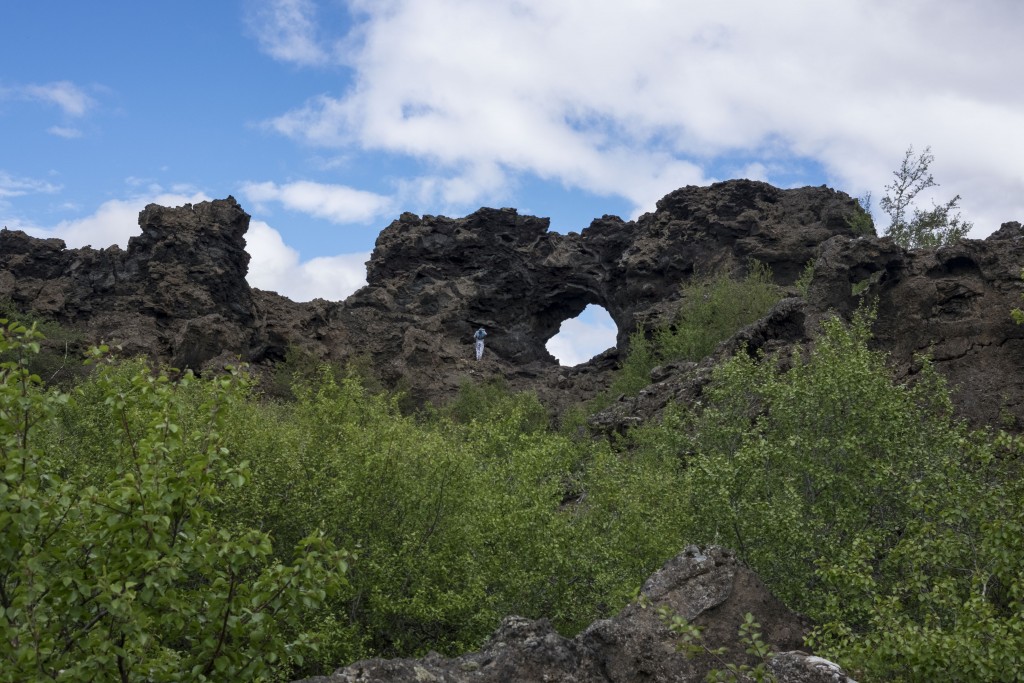 I was difficult to leave the enchanting Dimmuborgir, but there were many more sites to see on this trip. We decided to drive around Lake Mývatn and stop at various view points. At our first viewpoint, we met an Austrian hiker who said we’d been the first people she’d seen in 5 days. Insane. We gave her a short ride to the next viewpoint and kept on our way. Our next stop was a charming grassy shore with little pockets of land popping up in the water. At first, I didn’t expect much of this little spot, but I followed the footpath to the water and found rocks ripe for climbing and hopping. It was very fun. My only complaint, which I reluctantly share as the day was so lovely I don’t want to mar the experience with negative remarks, was the damn flies! So many flies, all up in your face. In your ears, up your nose. As a positive, though, they weren’t biting flies, so they were merely just annoying. 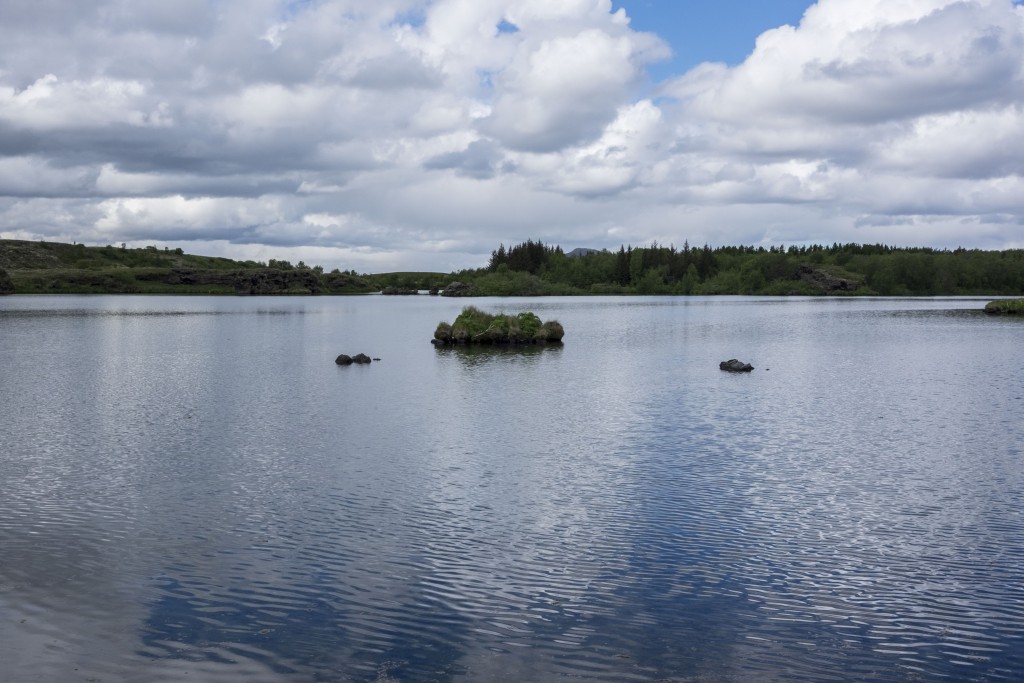 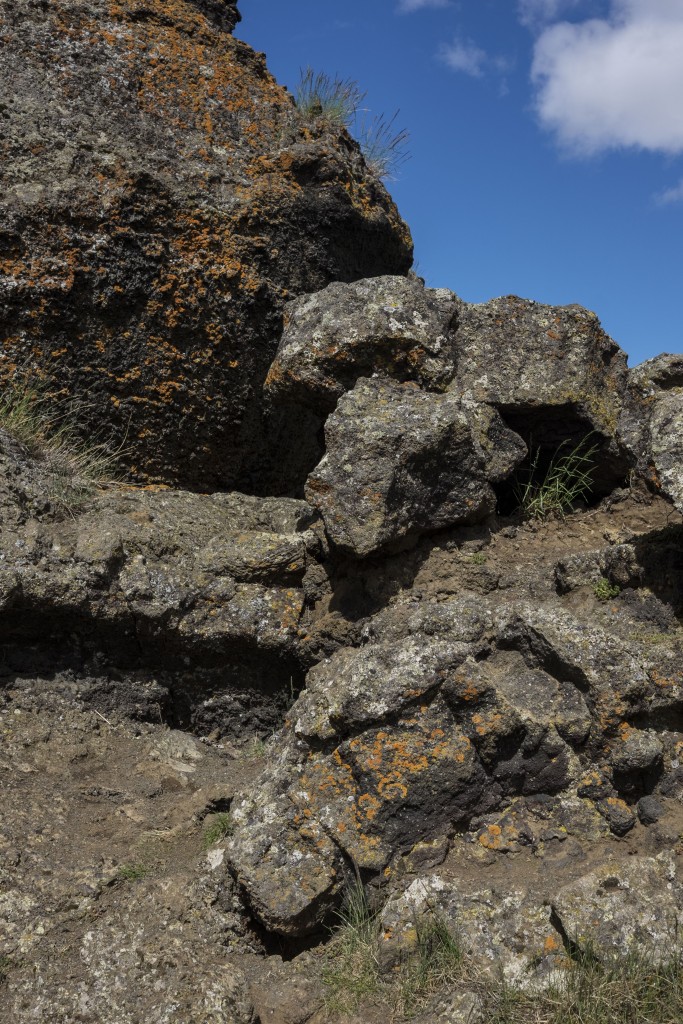 Just down the road, we encountered little mini-craters cover in grass. Yet another world. I laid in green ground along the top and took a deep breath. It was a welcome serenity. 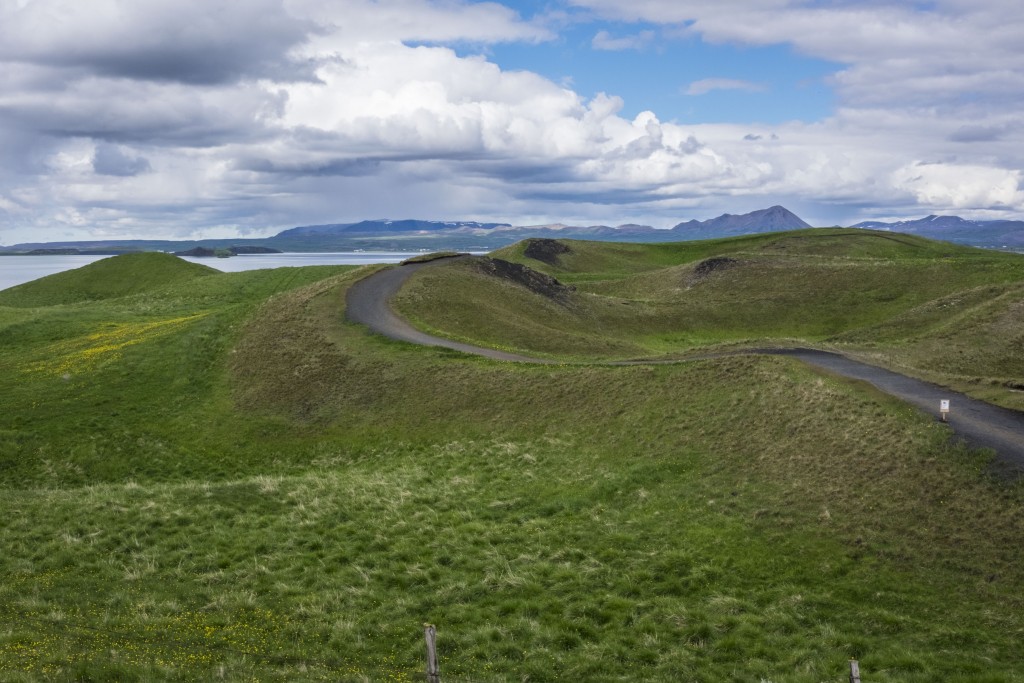 With a quick stop for coffee, we left Mývatn for Húsavík. The weather couldn’t be better. The whole drive was a dream that culminated with the view of town up ahead through fields and hills covered in millions of purple wildflowers. A welcoming entrance, I’d say. 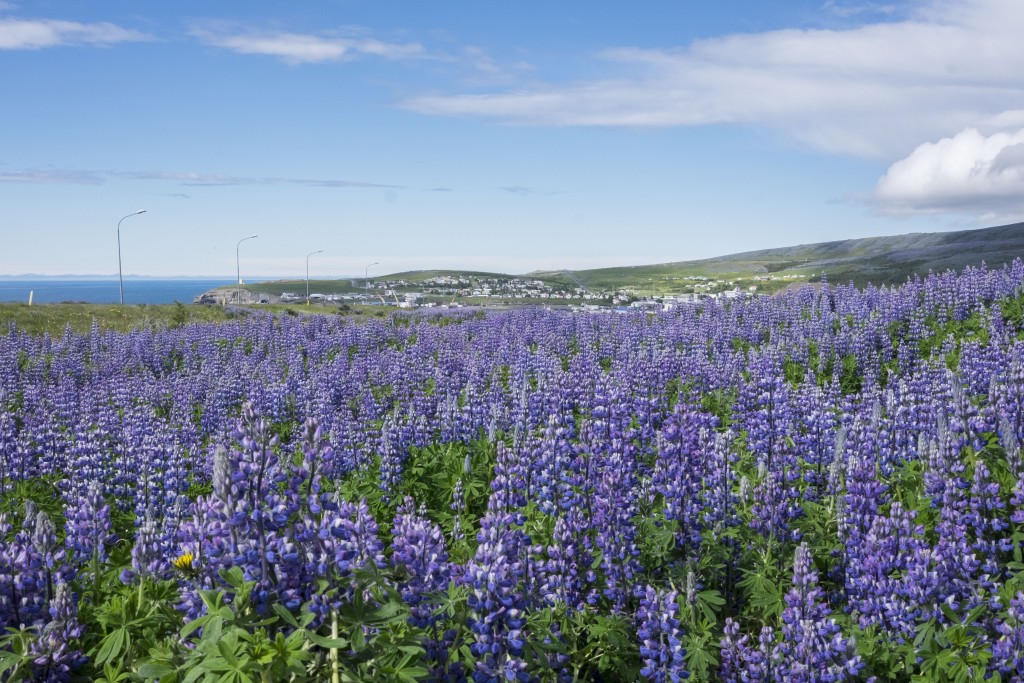 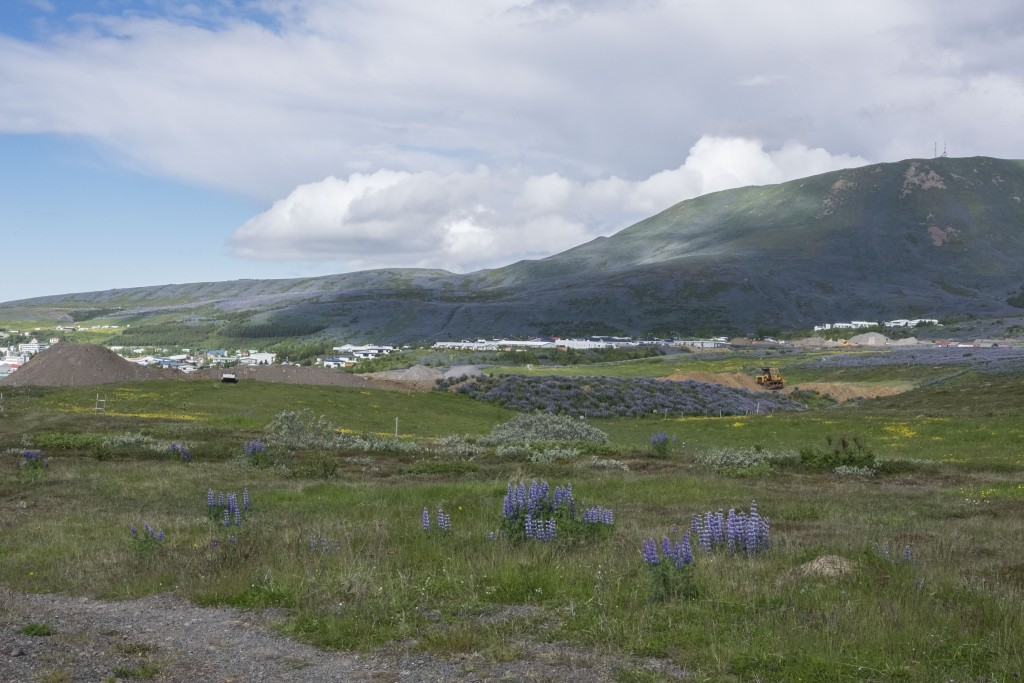 The entrance was an indication of the town itself—adorable. After checking into our room, we walked about to various shops and views. First stop, though… licorice dipped ice cream! A church, the port, a book store, and dinner—a wonderful night. 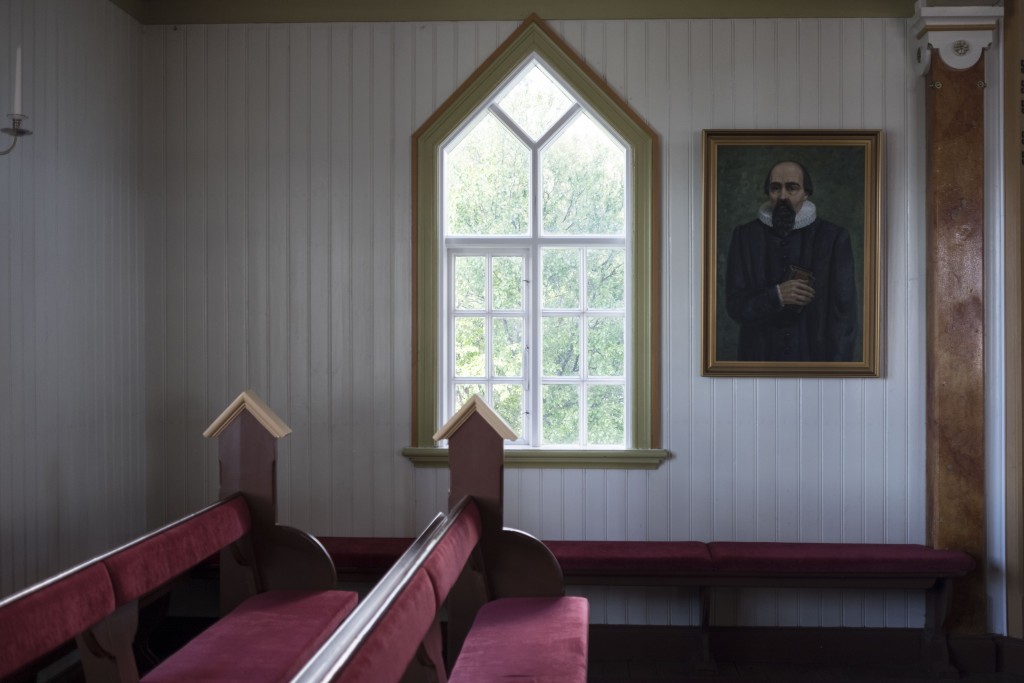 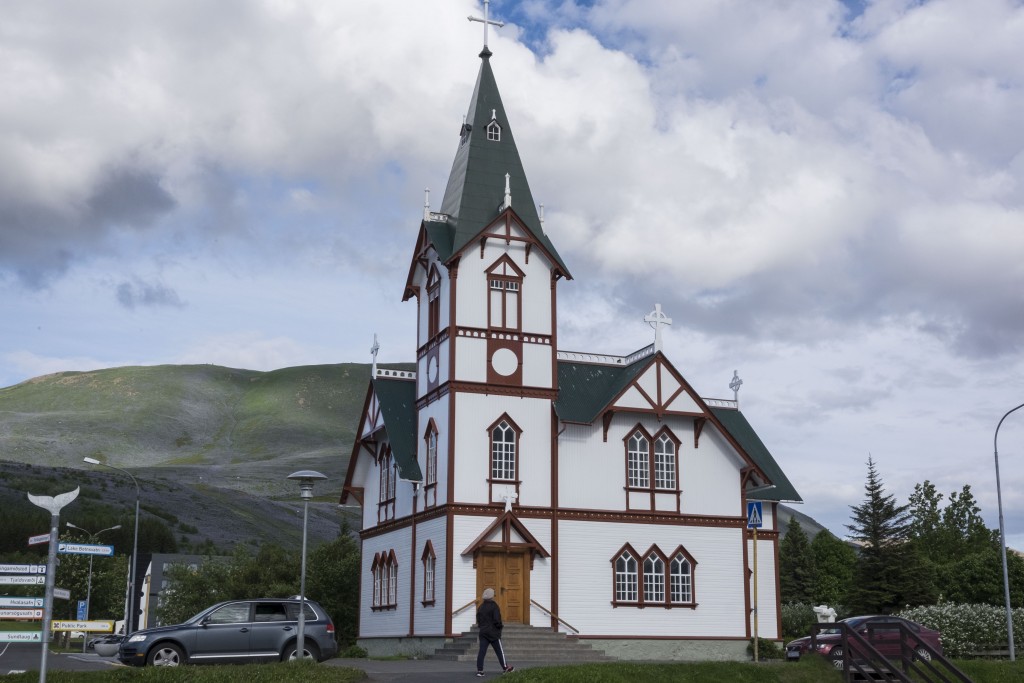 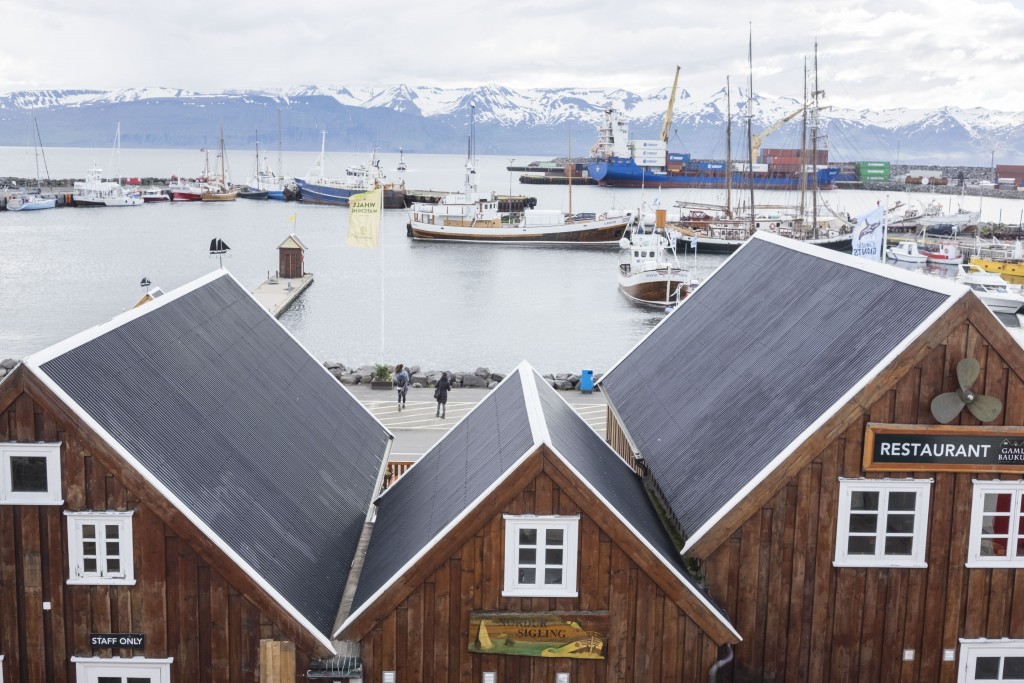 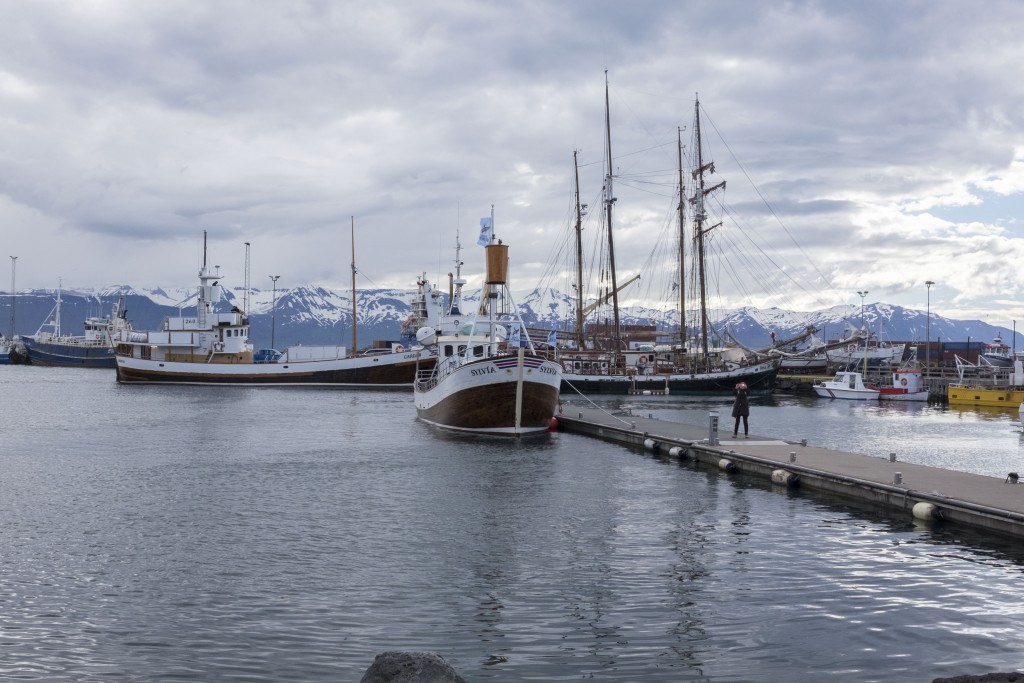 A beautiful day in a captivating region. Tonight’s sleep was much easier. We woke to grey skies with rain wind in the forecast. Not ideal hiking/driving conditions, but we had a plan…

First, a quick visit to the Húsavík Museum, and then we wanted to hike around Ásbyrgi canyon, said to be the hoof print of Odin’s horse. Even though it was cloudy and a bit misty, the hike was gorgeous. Lush foliage held lovingly by a cliff on three sides. At the base was a little pond with baby ducks making their way around the rocks. Much adorableness. I snatched some plants to press before we headed out to our next destination. 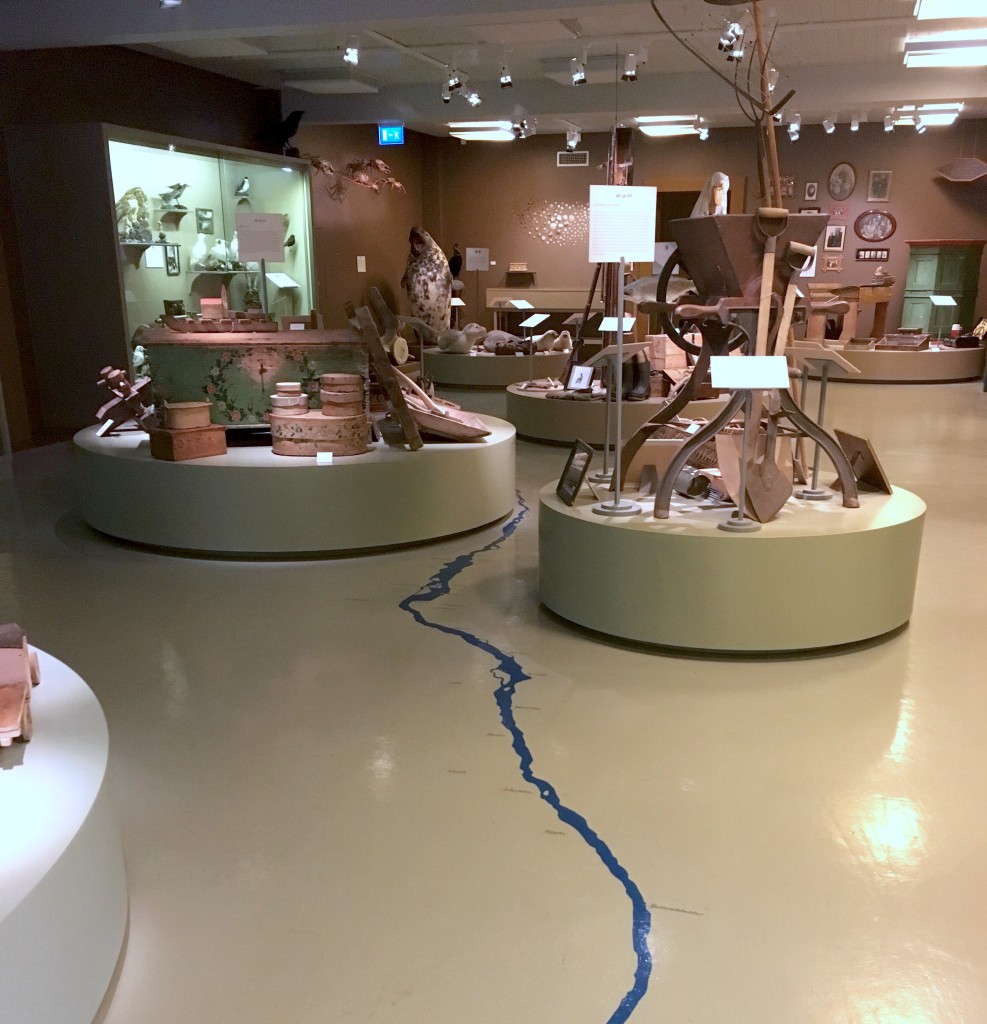 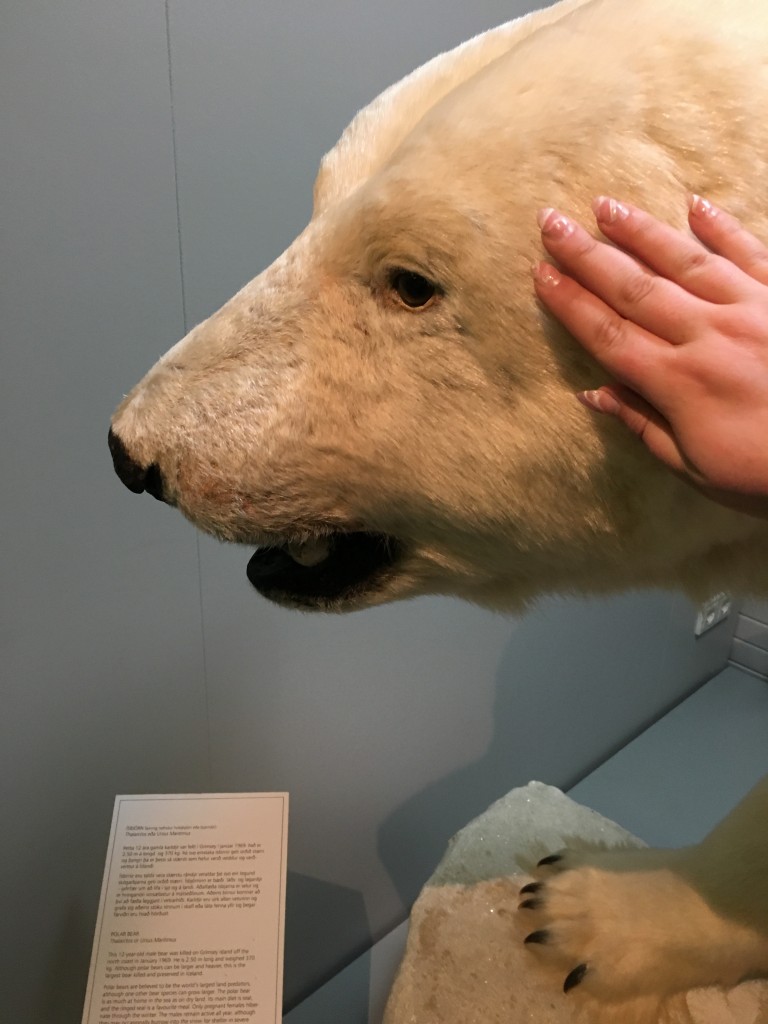 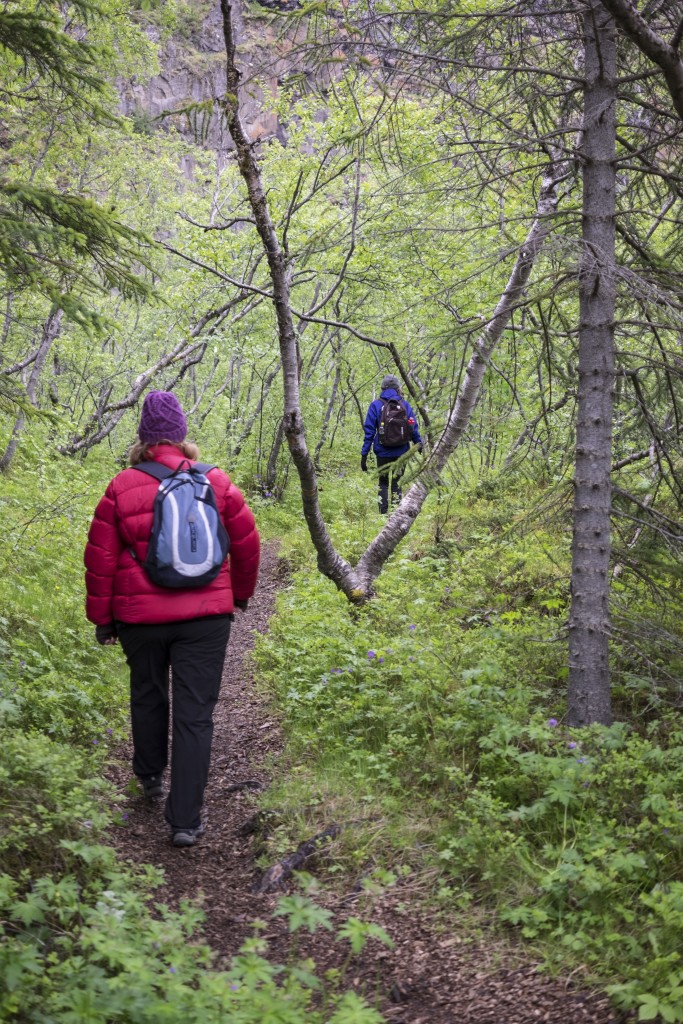 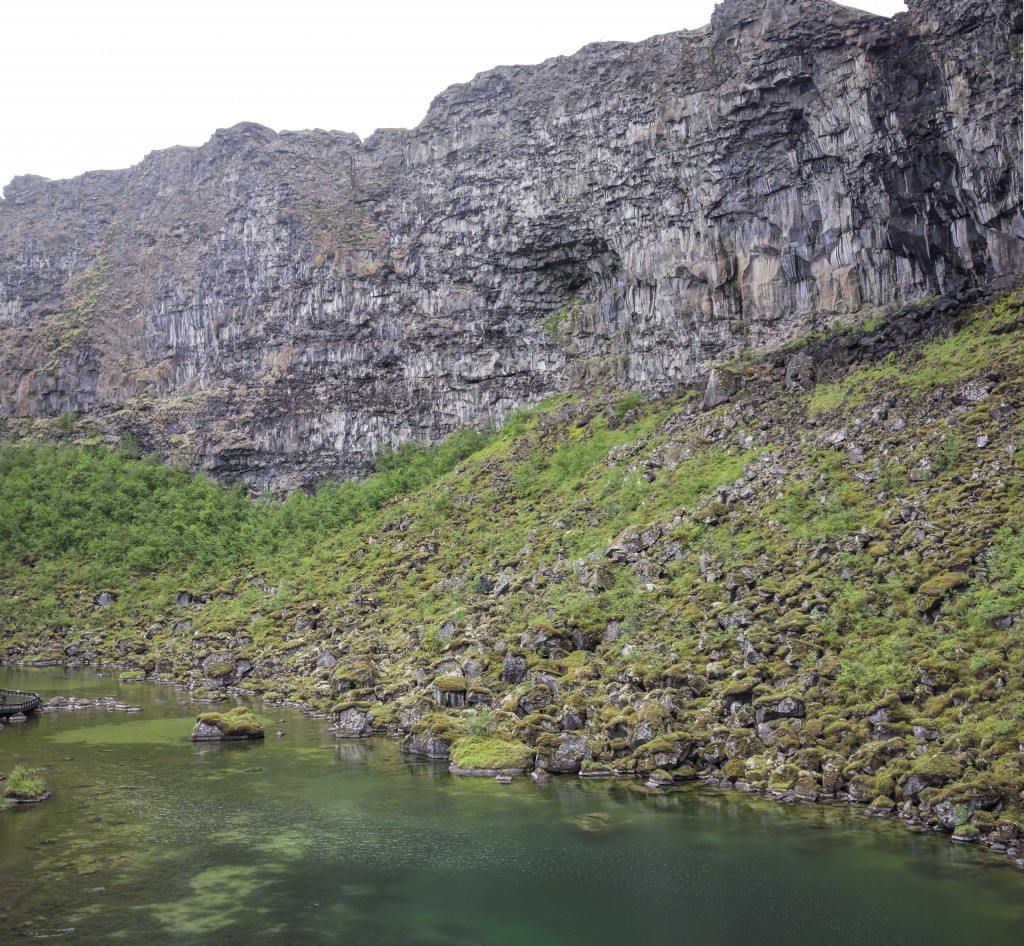 With the fog and the cliff, we were flurries away from being inside a snow globe. Next stop: the giant waterfall, Dettifoss. First, a less than enjoyable drive on a bumpy road. Everyone passed me, but safety is sexy, so I have no regrets. The waterfall was intense. So intense, in fact, that I could only take a few images before my lens was too spotted with water droplets. We weren’t there long, but I’m glad to have seen it. 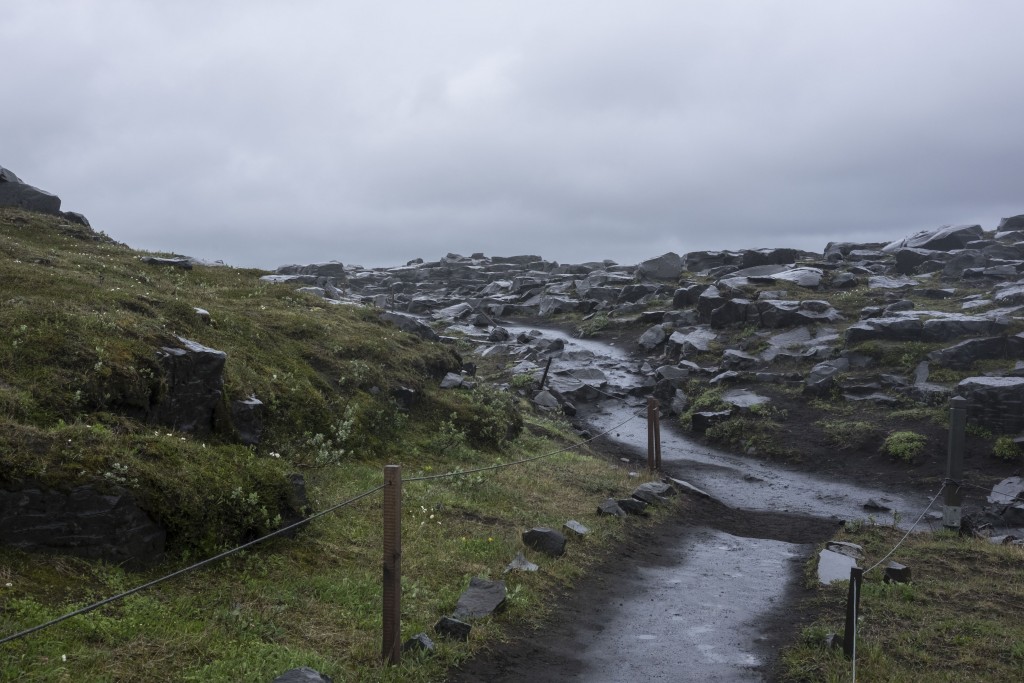 After a fairly unsuccessful selfie with the fall, we headed back to the Fish Factory. The weather just kept going downhill from there. Wind and rain and fog so thick visibility was difficult. I channeled all my chill to make it home safely, which we did a few hours later. Once we were cozy inside our beds, Una sent us an article of crazy flooding happening in the next fjord over. My shoulders are still a little tense from that drive.

As I’m entering my last week here at the Fish Factory Creative Center, this adventure is one I’m grateful to have had so far. Tonight we will gather as a group to share what we have worked on over a potluck. Should I be getting so sappy? It’s not over yet.